WHYT RBBT is an Los Angeles and San Francisco based multimedia project with its roots increative activism and the use of music and media to affect socio-political change and inspiredialogue about important issues. The group is comprised of San Francisco Based producer Adam Ohana, who has released music under various guises, most notably the moniker An-Ten-Nae, which has earned him well over 60 million streams, collectively, and Top 10 charting oniTunes, performing at venues and festivals around the globe, including Red Rocks, Coachella,Electric Forest, EDC, Burning Man, Global Eclipse and many more. Adam teamed up withindie-electro artist Eriel Indigo, whose vocal shapeshifting abilities and arresting lyrical contentlend to a rich, eccentric palette. The pairing brings WHYT RBBT a truly radical, new sound.Accompanying Adam & Eriel is a morphing team of performers, activists, and media specialists,some of whom have worked on major political campaigns.

WHYT RBBT launched their first single Revolution,July 4th. For their first release, the bandopted for a more grassroots, almost political campaign resulting in thousands of people sharing their Pledge Video which was instantly blasted around the globe with the hashtag,#IMWITHWHYTRBBT. This instantly gave them a devoted following, hungry to help spread their powerful, positive message. Their first show wasDiplo’sBurning Man Block Party in San Francisco, which was met with glowing reviews. The group will be doing a limited launch seriesof teaser shows in Denver, S.F., L.A., San Diego, and Portland. WHYT RBBT will be releasing each song from the album as a single, slowly unveiling a story ofimagery, filled with codedmessages. Join the WHYT RBBT Revolution! 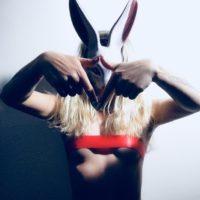