il:lo: "So excited to share these releases with you soon... https://t.co/W7cUzxse5i"

il:lo was born from the meeting of Pierre Navarron and Jean-Charles Thibout in Prague in 2010.The stage name il:lo, is a reference to the high and low frequencies. The French duo takes their inspiration from their travels and takes the names of their tracks from the towns they have visited.

Following the releases of their first EP Distances (2012) and the single Jaro (2014), il:lo was offered label deal with DLoaw&co. They released EP Places in 2015.

The album track “Imprenta 1” and “Emei” were featured respectively in a Rocky Mountain Bicycles and a Salomon web commercials.

In 2017, il:lo signed to Chill masters records label the release of the EP Vega. The album track “Kelele” was featured in a Ysé web commercial.

il:lo is joining Future Archive Recordings in the 2019 summer, among artists such as Blockhead, Little People, Arms And Sleepers and Yppah and will release their fourth EP, Sloh, in December 2019.

Their two tracks “Vega” and “Jade” will be featured in Apple photography and video software by the end 2019.

il:lo’s sound is oriented on beats and samples but typically “soothing”, combining influences ranging from club music to world music. il:lo’s sound is a blend of acoustic and synthetic melodies. It could well be perceived as heavy as it is light, with its sombre bass lines as well as floaty brass tones.

il:lo is little by little becoming a figure in the 2010s downtempo electronica scene among keys artists such as Bonobo, Emancipator, Four tet or Tycho. While their earliest work was firmly based in trip hop, their style soon became more upbeat.

il:lo played several shows in Europe from 2015 with a peak during their spring tour in Germany with Kognitif and Mounika in 2018. As an electronic duo they have a strong and deep set to present playing machines and synths. All their tracks are reworked in a pure punchy electronic flow. As a band they are supported by a drummer and a trumpet player, adding an incredible power and atmospheric feeling to the show. 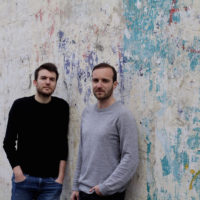