Starting off with keyboards as an infant, G-Space taught himself how to improvise on the piano throughout the years. G-Space has created his own distinct sound that grazes multiple genres, such as; world, funk, jazz, trap, glitch, and bass. He tends to play a set that consists mainly of his originals and the rest is filled with close friends’ music and other artists that he looks up to. Having inspirations from Jimmy Hendrix, Eprom, Mr. Carmack, The Grateful Dead, Shlump, Smith., Bleep Bloop, Boogie T, Pretty Lights and many more, G-Space has nested his way into quickly becoming one of the most interesting acts in the scene.

Not only does he play on multiple instruments and create amazing electronic music to match it, he has added a unique visual aspect to his performance. It’s called ‘Tricking’ which by definition, is a style “of extreme sport where the “athletes” do cool, fast, beautiful flips and kicks without any wires or trampolines,” (Defined from Urban Dictionary.) While playing the keytar on stage he is able to do a backflips and other insanely physically demanding and talented tricking skills. Having this special type of performance has been getting him recognized by many, as he has played Imagine Festival, Ultra Festival, and has just recently finished his ‘Euro-Trip Tour’ which spanned across several countries in Europe.” 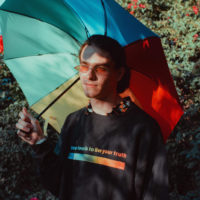