Blockhead: "@LF_Doom Yeah you might wanna check these out if you think thays problematic. Though, part two where he goes to Africa would be an issue"

Tony Simon, a/k/a Blockhead, has been making and releasing utterly distinctive, funky andemotive music for the last two decades. Blockhead grew up in downtown New York City. A fanof a whole range of sounds, especially hip-hop, Blockhead steadily built atremendous collectionof tapes and later CDs from innumerable artists, a quiet accumulation of knowledge and know-how. After a brief stint as a rapper, he realized his calling was behind the boards and not on themic–and from there he began to produce beats, carving a niche as a sought-after undergroundbeatmaker that people call when they want something special. Blockhead produced nine trackson Aesop Rock’s critically acclaimed album “Labor Days” and half the tracks on Aesop’s followup EP “Daylight.”He has also worked with other indie giants Atmosphere, Murs, Mike Ladd andIllogic, and contributed three tracks (including the first single) for Cage’s “Hell’s Winter” on DefJux. The other producers on the project are DJ Shadow, El-P and RJD2. In between, he foundtime to complete albums for Mush Records, Ninja Tune, Backwoodz Studioz, De Wolf, andYoung Heavy Souls. 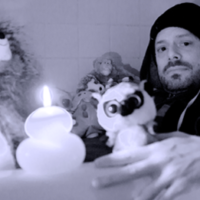